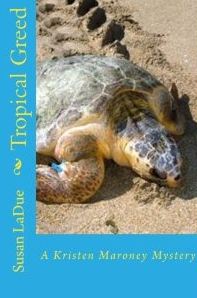 As the tourist season winds down in the Caribbean town of Placencia, boutique owner Kristen Maroney looks forward to a rest. Declaring that everyone can use a party, her friend Claire organizes a beach barbeque. Kristen accepts her invitation reluctantly, only to find out that Claire intends to use the gathering to educate her guests about the plight of sea turtles.

Kristen's hardly an environmentalist, but Claire's beautifully moving footage of damaged coral reefs and a greatly diminished turtle population arouses her interest. Then, when Claire takes her scuba diving, she sees first hand the turtles' gentle grace and the mindless devastation of the reef. By nature a woman who can't leave problems unresolved, she plunges into the cause.

She starts asking questions, and suddenly finds herself flat on her back in the hospital with multiple injuries. To make matters worse, her obstreperous grandmother has arrived from Las Vegas and is making life miserable. She thinks things can't get any worse, but no sooner is she out of the hospital than she is attacked again and this time her life is threatened. To keep herself and her Gram safe, she must take extraordinary measures to get some very evil men before they get her.

The Wee Hours of Thursday
​When I awoke my head was splitting and something covered my face.  Terrified, I ripped whatever it was off and my head exploded.  I lay still and struggled not to lose consciousness.  My face was wet and sticky.  When the pain had leveled out, I opened my eyes.  I was lying in the back seat of a moving car, but I didn’t dare look around to investigate.

“Kristen, you awake?  It’s Hector Petters.  You’re in my patrol car on the way to the hospital.  You must lie still.  Don’t try to lift your head.”

My whole body went limp with relief and I started to sob, but it hurt too much.  “Hector, thank God!” I cried.  Then I panicked again.  “Where’s Conrad?”

“I felt a pile of soft cotton next to my head and picked it up so I could look at it.  It was Conrad’s tee shirt and it was covered with blood.  My cheek continued to seep and blood trickled toward my ear.  “What happened to me?” I gasped.

“Why aren’t I in an ambulance?”

“It would take too long.  Conrad said we should hurry and I agreed.”

“He’s fine.  He fired a shot in the air and everybody ran.  We’ll find out what happened.”

The pain accelerated again, so I closed my eyes and focused on breathing.  I was terribly afraid I’d vomit all over Hector’s patrol car.  I managed to keep things more or less on kilter and when we got to the hospital the doors opened on both sides.  I heard Conrad barking orders but he sounded far away.  A man in white lifted my feet while another boosted my shoulders so they could slide me onto a gurney.  I yelped in pain and passed out again.

The next time I woke up, I was in a real bed and feeling better.  The pain in my head was a distant hum and my cheek throbbed gently.  Things were kind of soft around the edges, which was a distinct improvement over the ride to the hospital.  The nausea was gone and I was very thirsty.  Conrad’s voice came out of nowhere.

“Yeah, listen don’t try to talk.”  He kissed my forehead and stroked my arm.  My hand was hooked up to an IV.  “Someone hit you on the head.”

He laughed, relieved.  He placed a bent straw between my lips and while I sipped, he explained.  “You have a concussion and your left cheek is fractured.  You have stitches over your ear and in your cheek.  Don’t move your head any more than you have to.  The IV is antibiotics and fluids.”  He walked around to the other side of the bed.

“You feel what I’m putting into your hand?”

“Yeah,” I croaked again, making sure to keep my head still.  The water tasted like champagne.

“It’s for pain medication.  Push the button when you need more.  I’m leaving it in your hand.”  I pressed the button like crazy and Conrad laughed again.

“What happened?” I asked.

“I’m not entirely sure.  I was talking to the poachers and I heard you scream.  I ran toward the trees where I saw someone standing over you.  I fired my .38 into the air and he ran.  The poachers disappeared too.  But don’t worry about that now.  The cops will find the guy.”

“No,” I objected, suddenly upset.  Then I forgot what I was going to say.  Conrad put a cool hand on my forehead and kissed my good cheek.  He smelled like cinnamon and I wanted him to curl up with me.