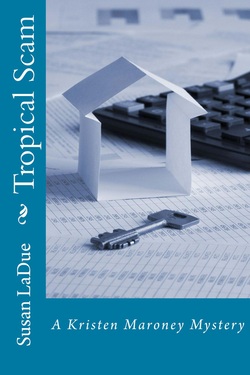 Description: Author Susan LaDue is back with Tropical Scam, the newest book in her compelling Kristen Maroney Mystery series, featuring Kristen, “the accidental sleuth” who is too nosy for her own good! This time, LaDue goes deep into the danger zone of the Caribbean’s unregulated real estate industry and the regrettable greed it evokes. If you work in the tourist industry in the Caribbean, summer is a time of too much heat and too little money. Boutique owner Kristen is busy trying to sell off last season's inventory when her friend Claire tells her that a mutual friend, Flor, is a victim of a shady real estate deal. Thinking only to help Flor, Kristen unearths widespread real estate fraud. Unhappy at the exposure, the fraudsters come after Kristen in a big way, and she is forced to bring them to justice or suffer irreparable harm. “Tropical Scam, along with the other mystery books in the series, stand out because they’re “quickies” and can be read in a single sitting,” adds LaDue. “Along with the added bonus that reading a Kristen Maroney mystery is like taking a short vacation to the Caribbean!”

Tropical Temptation: A Kristen Maroney Mystery, by Susan LaDue, is a short mystery involving a cast of characters residing in Placencia, a small Caribbean town in Central America. Kristen Maroney owns a beach and resort wear boutique. She’s divorced, has a sexy boyfriend, wonderful friends, and a dog named Buster. Her store doesn't make a ton of money, but she’s no longer working in the fashion world, which was ruining her life. She hated the job and resorted to drugs to get through each day. Now she’s living in tropical paradise and is content. That is until her friend’s husband starts to act strange. When Amelia’s husband, Manny, is seen having dinner in an expensive restaurant with a female tourist, people start to talk. The mystery woman is gorgeous, rich, and won’t talk to anyone. Manny is keeping his mouth shut as well. Is he having an affair? Or is there another reason why he meets with the beautiful woman? He won’t even tell his wife. All he’ll say is that people should trust him.
For Kristen that’s not enough. She starts to ask questions. As it turns out, she should have stayed out of the mess. However, she realizes this too late and now she has to get to the bottom of the mystery or else.This book is under 100 pages, which makes incorporating many twists and turns complicated. Instead, it’s a straightforward mystery that can be read in one sitting. LaDue introduces an interesting ensemble of characters, yet doesn't delve too deep into their lives. The mystery surrounding Manny is predictable considering the setting of the novel. I found the busybody Kristen likable, yet frustrating since she bumbles her way into a mess. That’s the good part of the story. You know she’s heading right for trouble and as a reader you want her to get into a terrifying scrape so you can squirm in your seat. Mysteries can be predictable and fun. Writers can’t reinvent the wheel with each story.
Yet they can employ certain tactics that will keep their readers interested. For me, I need more than one likable character. Yes, I liked Kristen Maroney and I wanted her to succeed. But when her life is in danger, I don’t want to know what outfit she is putting on for the day. Also, I don’t need to know about her store having a sale in order to make up for lost profits after her store is vandalized. I felt that the book was more of a recounting of Kristen’s daily life and not enough suspense. Kristen discusses the mystery with her boyfriend and bad things happen to her, but the inclusion of her daily routine drained the story of its momentum. It’s a difficult dilemma. Authors need to include some description to place the reader in the story, but including too much can take the reader out of the story as well. Finding the balance is important for a successful story.
Overall, I thought Susan LaDue’s novel was decent. While it entertained me I had to wonder about the actual purpose of the story. It seemed more like an introduction to Kristen Maroney’s life and the upcoming series and not a full-fledged mystery novel. LaDue has laid a solid foundation. The tropical setting is perfect for a series. The characters are quirky and can be explored more. I’m curious to see how she develops the series and what other scrapes Kristen will get into. If she can iron out some kinks the series can be great. I give this book 3 out of 5 stars.

Self reflecting and wise, October 20, 2012 by David F. Ross
Susan LaDue's The Veranda is a solidly written fictional account of a life looking back over many significant relationships - viewing them in objective and assessed terms - like pieces of a beautiful view from the veranda where the main character safely tabulates a life of connection and exploration. From a distance and described as a hodgepodge of human relationships from her ordered perch on a rainforest porch - main character ultimately realizes that her own trajectory through the world from a young age to a more seasoned self has lead her to the very moment where she now exists in a comfortable, self reflecting and wise view over her own landscape. In present time at the end of her reflections, domestic chaos unfolding near her veranda -but not on it - builds upon her conclusion that each human relationship over time can work to bring oneself to a comforting, valued and true point of contentment.